Being the capital of Hungary, Budapest is filled with interesting sights to see and places to visit – you could truly explore it for weeks and never get bored. It’s split in two parts: Buda offers nature and historical castles, while Pest offers a more city-like visiting experience, as well as affordable and tasty food. Dramatic history, extravagant architecture, healing thermal waters, and a nightlife that is unrivalled in Eastern and Central Europe – Budapest has something for everyone.

The headquarters of the dreaded ÁVH secret police houses the disturbing House of Terror, focusing on the crimes of Hungary’s fascist and Stalinist regimes.

If you want to learn more about Hungary and check out the most important national relics, head over to Hungarian National Museum, and if you want to explore the 2000-year history of Budapest, visit the Castle Museum.

Those who appreciate arts over anything else will enjoy the exhibits that go back to ancient Egypt, to stellar collections of Spanish, Flemish, Italian, and German art, all in the Museum of Fine Arts.

House of Houdini is dedicated to the world-famous magician and escape artist – it offers a cabinet of original items from Houdini’s life, such as personal letters, handcuffs, documents, and props from the US miniseries ‘Houdini’.

The Hungarian Electrical Engineering Museum might not sound like everyone’s cup of tea, but there are some exhibits unusual and quirky enough to warrant you a good time.

The Memento Part is home to over forty statues, busts, and plaques of Lenin, Marx, Béla Kun and others. It is located 10km southwest of the city centre and is truly a mind-blowing place to visit.

The Eclectic-style Parliament has almost seven hundred extravagantly decorated rooms. You can see several of these along other features on the guided tour of the North Wing.

The Royal Palace has been razed and rebuilt at least half a dozen times over the past seven centuries. Today it holds the Hungarian National gallery, the Castle Museum, and the National Library.

Gresham Palace is a luxurious art nouveau building facing the Danube River. Its gold tiles, mosaics, and wrought-iron Peacock Gates are celebrated. It was built by an insurance company in 1907, and today it houses the luxury Four Seasons Gresham Palace Hotel.

Pálvölgy Cave is a 29-km long cave noted for both its magnificent stalactites and rock formations. Tours last an hour and depart from the lowest level, taking you through dank, narrow passages and up several hundred steps. Highlights include John’s Lookout in the largest of chambers, as well as Radium Hall, reminiscent of Dante’s Inferno. The temperature is a constant 11°C, so remember to wear something warm.

The largest aquarium complex in Central Europe, the Tropicarium, houses local specimens as well as sharks. Visit Tropicarium on a Thursday between 3pm and 4pm if you want to see the sharks being fed.

The Budapest Zoo has an extraordinary collection of big cats, hippopotamuses, bears, and giraffes, as well as themed houses, such as Madagascar, wetlands, nocturnal Australia, and more. It is perfect for animal lovers to learn more and see some exotic species.

The Károly Garden is filled with colourful flower beds in the spring and summer months. Take a stroll or sit down on a bench and admire the nature around you. If you’re travelling with children, do not worry, as the park also has a little playground.

Many events take place in Budapest all year round. From May 2nd to 4th, Days of Óbuda will be held in District III. You can expect free concerts, street food delicacies, and family activities.

Foodplay is a temporary exhibition in the Hungarian Museum of Trade and Tourism. It features contemporary food photography and styling. Artists at this exhibition aim to present a modern take on food in art.

Many different restaurants and food places can be found in Budapest. The city offers numerous cuisine choices, and everybody can find something they like. If you would like to try some traditional Hungarian food, you should check out Földes Józsi Konyhája or famous Kéhli Vendéglő. The city also provides delicious seafood so pay a visit to Horgásztanya Vendéglő or Govinda   and Hummus Bar if you crave vegetarian. 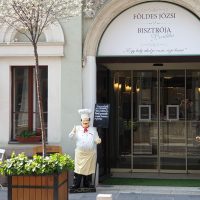 Budapest offers an assortment of different accommodation – all you need is to know how you want to spend your nights in this city.

Avenue Hostel is located in the centre of Budapest so it is near every route you might take trough the city. The hostel offers free Wi-Fi, transfer from and to the airport, non-smoking rooms, 24 hours open reception and much more.

Dob Twenty Rooms is the most famous B&B with reason. It provides excellent service for low prices, and it has everything you might need. It is located in the centre of the city and it is guests’ favourite.

Iberostar Grand Budapest, located in Budapest’s centre features luxurious air-conditioned rooms with free Wi-Fi access, a spa for a free use and much more.

Budapest is well connected to the neighbouring countries via rail, air, and roads. Budapest’s extensive public transit system is generally convenient and easy to use. Tourists can navigate most central areas by metro, but a few major destinations, particularly on the Buda side, are served by busses or trams. Unfortunately, compared to similarly-sized cities in Western Europe, Budapest’s public transit infrastructure is generally more worn-down, more outdated, dirtier, less reliable, and less comfortable. Ticketing systems are not automated, many vehicles are insufficiently or not at all heated/air conditioned, and mechanical problems are frequent. Nonetheless, for getting from A to B, public transit is still a good option, and many routes frequented by tourists (e.g. the bus to the airport) are more modern and cleaner.

If you want to learn more about public transportation in Budapest, visit https://bkk.hu/en/tickets-and-passes/

Autobusové trasy z a do Budapešti